Mark brought his Borealis up to us to fit the V2 top to it.  The goal in doing this was to make the velo a bit speedier and lighter.  We built the new top in carbon and kevlar.  When we were done  we weighed his velo it was 72 pounds.  He had weighed it at the Sea Otter Gourment Velomobile Gathering and it was 81 pounds.  To be truely comparable to that wight he may still end up adding a pound or two for the battery and lights. We were quite successful in reducing the weight.  There is still more potential for weight reduction if we replace the bottom of the shell which is a glass laminate with one of carbon and kevlar.   I estimate that we could further reduce the weight by 3-5 pounds.  Mark has a custom QNT inside his Borealis with 451 rims and skinny tires. On smooth pavement this combination is quicker than the 406 Marathon Racers I use on mine.  The 451 rims fit with a bit of room to spare in the front wheel wells.  The mould for the composite wheel covers is just barely large enough for the covers to work on this size rim.  If we made up new wheel covers we could save another half a pound. 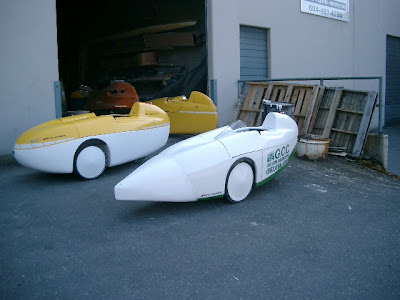 Mark  has made some modications to go a bit faster.  He has added a pointed nose to the front that is bolted and taped in place so it can easily be added or removed.  The heel cutouts in the floor are partially closed off with a lexan sheet.  There is also a wind deflector to divert the airflow around your head.  On his previous top he also had a canopy that goes between the wind deflector and the bump behind your head that cleans up the airflow a bit more.  With this configuration he was the fastest velo in a roll down test at the Sea Otter Velomobile Gathering.  Mark and I changed the lexan sheet that partially closed off the heel cutouts to a carbon sheet.  He now has a very small cutout in the sheet his heels pass through when pedalling.  For the future this sheet could have a bump in it for your heels rather than the hole further improving the speed potential.  I would still keep the hole in the right side as this is handy to still have reverse.

Mark and I did a couple of short tests with and without the new nose.  Mark needs to do some  controlled roll down tests before I am convinced that it is an improvement.  I was about the same speed with and without it on the section of highway that I normally ride home on.  With the V1 top, wind deflector and nose I was  29.5-30 mph while with the V2 top, wind deflctor and nose I was 31.5 mph.  Both Mark and I agree that the new top is faster.  I think most of the gain was from lowering the frontal area.  Cleaning up the airflow around your head is the single biggest speed improvement available.
Posted by velomobiles.ca at 11:57 AM