Progress on the next Milan 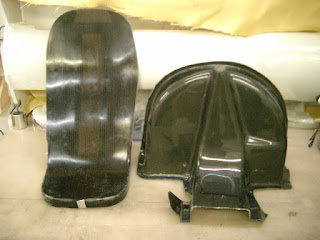 I finally finished off the seat mould and made one.  This one will go into the first Milan GT and I will take the seat from it and put it in the carbon/Kevlar one I have started building for myself.  This seat is a bit on the heavy side as I made it out of glass with one layer of basalt/carbon on the front side and in the ribs down the back.  Can drop at least 200g off the weight just by using less layers and it will still be strong enough.

The carbon wheel well came out quite well.  There is a reasonable weight saving from the glass/Kevlar version.  This part takes me a long time do as all the material needs to be glued in place before I put the bag on.  Being a fairly complex shape the carbon is in relatively small pieces which each need to be handled separtely.   The bag ends up with lots of wrinlkes in it which makes finding and fixing a leak a real challenge.  This of all the parts for the Milan is the one we will have the highest failure rate with.  I would much rather make a top or side of the shell as they seem to go quicker.  The shell parts do actually take quite a bit longer and I like to have two people when we wet out the part.  Much more satisfying when you demould a large part.

I am making up all the small parts for the next Milan so I can assemble the next one without being held up waiting for these parts.   This is also a good way to check that all the moulds are ready to use.  I anticipate that the first Milan GT for sale will be built in January.
Posted by velomobiles.ca at 10:09 PM 1 comment: 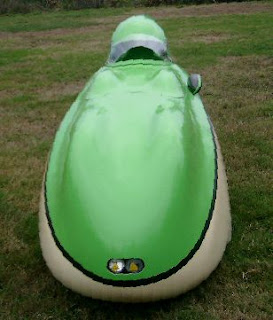 This is the new larger hood I can comfortably wear a helmet in. 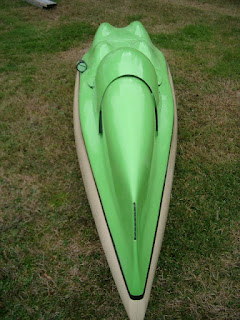 What it looks like from behind.  I have some thin foam attached with Velro to the back edge of the hood to add a bit of ventilation.  They are removeable so I can experiment with what works best. 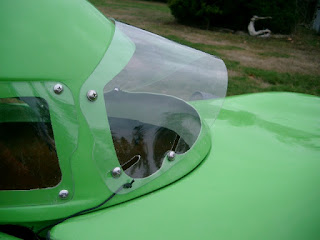 Close up of the slots that control the shape and position of the visor.  To open it you just push it up with your finger.  It stays in place quite nicely at whatever position it is set at.  To close it I have a short cord attached at the bottom edge that hangs down inside.  Just pull the cord toward you and that side closes.  Pull the other side and it is closed.  The cords are still a bit of a work in process.   Maybe a small hole in the middle of the visor at the bottom edge so you just use your finger to close the visor.  The other idea is a lexan loop bolted on the bottom edge instead of the hole.  The hole even if it is small will let a fair bit on water in at speed. 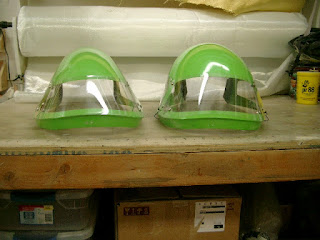 The two hoods  in an end on view.  the original hod is on the left.  The new Milan GT XL hood is on the right.
Posted by velomobiles.ca at 8:04 PM 4 comments:

I have decided to build a slightly larger hood so I can comfortably wear a helmet while riding.   Here in this part of Canada riding with a helmet is a legal requirement.  I have been riding with a helmet for a long time now and it just doesn't feel right without.  The other consideration is that if you were involved in a serious accident the insurance award can be reduced by estimated protection the helmet might have provided. 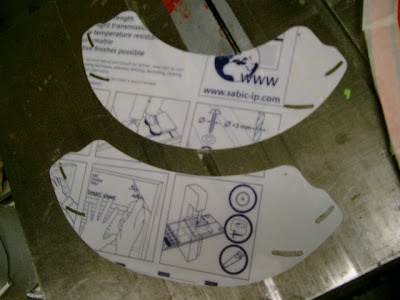 I ended up making two different front visors as the shape of the new hood is a bit different.  The original is the top one in the photo.  It seemed to take forever to get the right shape as I had to make the first one by hand and then transfer it into a CAD program.  I then used that to create the file for my CNC router.  A couple of revisions later and we have visors.  The advantage of cutting them on the CNC router is that they will all be the same so replacement is straight forward.   Besides, making the slots freehand was no fun.   ﻿ 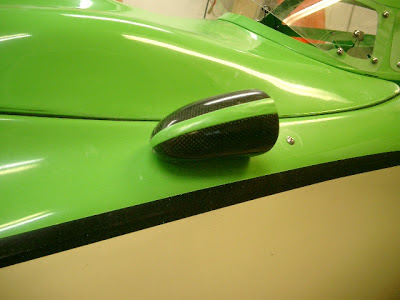 The first mirror fairing.  It turned out rather well but I orignally had the a bit too far back.  You can see the first mounting hole closed off by a bolt.  ﻿ 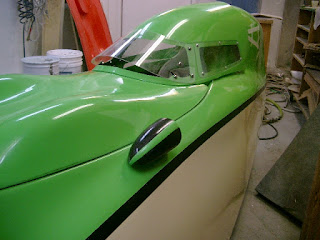 The reason for moving was that when using the hood the foward bolt holding the windshield was covering part of the mirror.
When I came back from the first ride in the rain I sat in the velo for about ten minutes just enjoying being dry while it rained away outside.  When necessary I could pop the windshield open to see under it.  Once over about 25 kph I rode with it closed but going up hills slowly I had to open it as my breath fogged it up.
Posted by velomobiles.ca at 9:44 PM 3 comments: