Well maybe not quite but certainly right up there.  There is a Wednesday night ride on the island here.  I have been taking part most weeks using the Milan SL, Milan GT  or my high racer.  Lately it has been the high racer but this week it was the Milan GT.  It ended up being a great choice for this ride for some not so obvious reasons.  The folks on the ride have been threatening to go north for some weeks now.  Going north is the most hilly and twisty paved road on the island and definitely the most velomobile unfriendly ride.  First one out onto the road decides where we will ride.  This week there was lots of milling around before someone finally turned left or right.  We turned right and then right again after the store so we were heading north.  The first kilometer was OK just some rolling terrain where I was out front but this wouldn't last much longer.   I was already braking a bit on some of the turns as I didn't know this section too well.  Several times the faster folks almost caught up but the terrain was just in my favor.  Then it started to go uphill and everyone passed me.  I almost caught up again but was reluctant to just let it run as the road was fairly twisty.  Time to just enjoy the ride and slowly pedal up the hills.  The sun was shining thorough the trees and it was a lovely evening.  Riding up wasn't so bad just take your time and look around.  I had only driven this section before and you don't see much at car speeds.  All the different greens at this time of year are remarkable if you only take the time and look.  After climbing the first big hill there is a very steep descent which had me on the brakes most of the time.  I was thinking that maybe I should just turn around and head back rather than have to climb back up this and more.   I kept going and met the group just after they left the turn around spot.  On the way back there were a couple of spots where it was impressively steep where forward speed was very low.  The group waited just before the last big descent and we all took off.  I was near the front and let the three or four fast guys go first.  I was on the brakes quite a bit.  Most impressed with how the GT handled the curves.  I could stay with upright bikes on the corners until I chickened out and braked.  No issues with braking at speed with tank steering as I had practiced at bit previously.  It was a good thing to have the tank steering as I was applying quite a bit of force at times.  So much braking that the next morning my hands were a bit stiff.  At the end there was a straight bit down and then up to a stop sign.  I couldn't resist finally shifting up to the big ring for the first time on the ride and going for it.  Short but quite fun to zoom by folks in their tuck like they were standing still.  Had to brake hard for the stop sign.
Posted by velomobiles.ca at 6:03 PM No comments:

While out for a quick spin my neighbour mentioned that I was riding topless.  At first I didn't think much of the comment but the next day after quite a few more short spins I got a chuckle out of it.   My short spins were rather short as I would only go to the nearest intersection where I could turn around.  I got rather good at using the crown of the road to roll backwards to make multi-point turns. 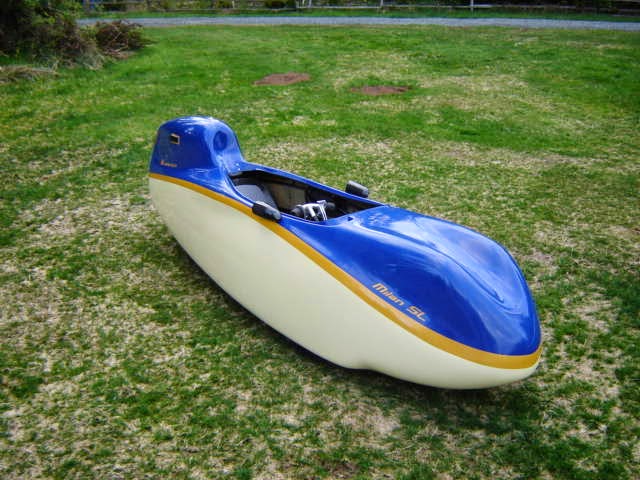 The reason for riding without the door on was that I was adjusting the the rear suspension and fine tuning the fit of the swing arm in the rear fender.  After a few attempts it is finally just right.  I may still adjust the length of the rear struts to slightly lower the back end of the SL.  The back end now a bit lower than before and we have gained a tiny bit of clearance at the front.

In the many times I had the rear wheel in and out and the velo upside down I took a good look and at the bottom.  The only bit that was scratched up was the scuff pads on the footbumps.  It seems that when the footbumps touch it slightly lifts the front of the shell as the front suspension allows this to happen.  One does still need to be aware of dips with slopes that go up just after the dip.  Mostly one can deal with these by taking them at an angle.   So far I haven't found the low ground clearance to be a real problem.  It's bit noisy at times scraping the protective skid pads but otherwise very manageable.  Yet another misconception that didn't come true.  The other two for the SL were getting me to fit for leg length and width between the wheel wells.  The distance between the wheel wells varies from 14.75 to 15.5" depending on where you measure but I still have clearance.  When I first mocked up the space it seemed awfully tight but it seems to work well for me.  The reason it works is that the narrowerest dimension is where your knees are and the widest where your calves or thighs would touch.  The more I learn about the design of the Milan the more impressed I am with the thoroughness of the designers. 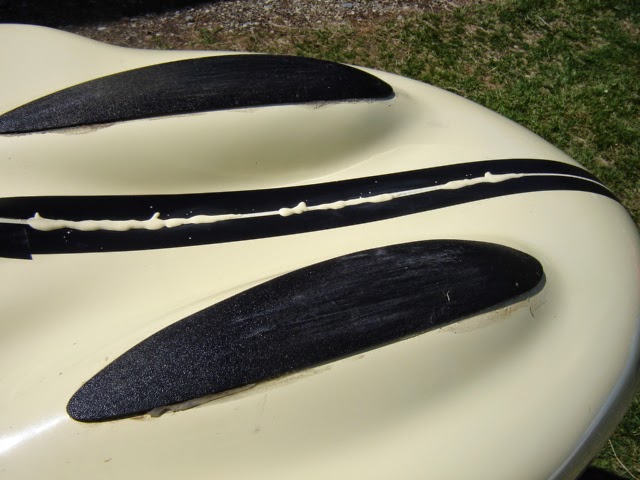 The scuff pads after riding for a while.  From looking at them they should last a long while.  The tape is so I can fill the little voids in the join line.  The gel coat fills will be sanded smooth once they are hard.  I'll also scrape off the silicone that has squeezed out from glueing the scuff pads on.
Posted by velomobiles.ca at 12:22 PM No comments: