The did a quick hand layup of the rib yesterday using some carbon and basalt.  It ended up weighing 178g and should be tough enough to stand on.  I couldn't get any deflection by pressing on it in the middle, supporting one end on the bench.  I didn't try really hard as this wouldn't be a good test as once its bonded in the shell, the shell will add more stiffness. Another reason I didn't try too hard is that the rib was not even close to fully cured. 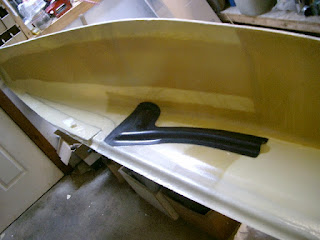 I glued the rib in and could check out it's effectiveness today.   First I put the part on the floor on some foam and stood on it.  Definitely strong enough.  Then I supported it on some blocks on either end and stood on the middle and jumped around carefully.  My conclusion is that it is a bit overbuilt.  It took about 50g to bond in so ultimately with a bit better layup using vaccum, just slightly less material the finished weight bonded in could under 200g.  Now just to make at plug and mould so I can do one for the other side.   Looking down on it from above. 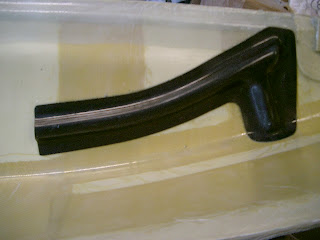 Managed to get the part I was worried about out of the mould without it sticking like the last one.  The left side bottom section of the shell is an experimental part to test the mould and planned laminate.  The test in the laminate is to use some Kevlar as the reinforcing bits instead of glass in a glass part. Kevlar will add some impact resistance and it's lighter than glass, being less dense so it builds thickness with less weight.  Kevlar seems to reduce transmission of noise through the shell.  If it proves its worth I will use it in the standard glass laminate.  Not adding it due to the extra cost would be short sighted provided it works. 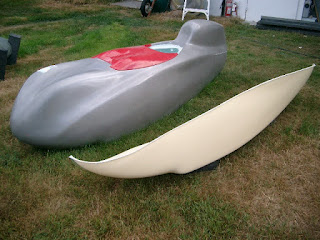 After examining the stiffness in the floor I decided that a stiffening rib as the best way to stiffen it up.  The other option I considered was adding a foam or honeycomb core.  The core is more work and may not be lighter.  The stiffening rib would go from the back edge of the wheel housing to where the rear suspension pivot is mounted.  The rib along with the very stiff corner at the bottom edge of the shell should act as a frame on either side of the shell.  If it works as well as I think it will the drivetrain should be very stiff.  This should help with climbing as there will be no losses due to flexing. Here is a picture of the pattern I am developing for the stiffening rib. 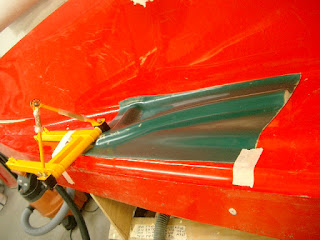 Another one with the rear suspension taped about where it mounts.﻿ 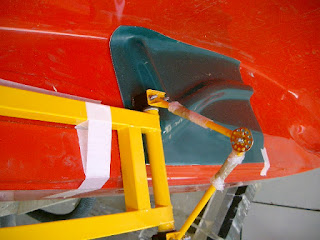 Other velos seem to have an aluminium frame member running under the seat (Mango) or an aluminium extrusion running in the chain trough (Quest).   Hopefully my solution works better than either of these methods.  If the stiffening rib is strong enough to step on beside the seat you will have some options for getting in and out by not being limited with only putting weight on the the bridge between the wheel housings.  There will be another rib bonded to the side of the shell from the bottom corner to where the crossmember from the fender ties in with the sides.
Posted by velomobiles.ca at 10:32 PM 1 comment:

﻿
It finally happened.  I stuck a part in a new mould.  This hasn't happend for a few years and it is always a suprise when it does.﻿ 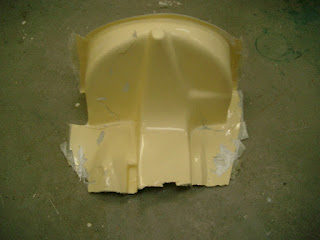 I did manage to get the part out of the mould after a long struggle.  You can see where the gel pulled off the part and stuck to the mould.  I had to cut and break up the part some to get it free.  I was even  able to chip the stuck gel off the mould without damaging it.  I only have a small bit to sand off.  It's only about the size of my thumb nail.  Luckily it didn't stick where the suspension strut fastens at the top of the wheel well.  There is a bit more to sand around the edge of the mould where the vinyl ester resin really stuck.  This was on the flange where there was no gelcoat.  Vinyl ester does stick much better than polyester gel coat.  It the future I will use PVA in new moulds until they are broken in.  I thought lots of coats of wax would do the trick but I guess not.

I have another mould sprayed up which I am hoping will release well.  This mould was treated the same as the one I stuck the part in.  I am keeping my fingers crossed that it comes out OK.
Posted by velomobiles.ca at 11:22 PM No comments:

Surprise, not riding velo much

There is a reason for not riding one of my velomobiles much.  I have a high racer that I am trying to get down to under one dollar per kilometer.  It has taken quite a while to get to this point where I am close to the goal as I have had the high racer for three or four years.  Obviously I have not ridden it much opting to use a velomobile instead.   It is a Bacchetta Strada that I bought from Cambie Cycles for a good price.   I do have some criteria for doing this, it has to warm enough to ride with short sleeves, it has to be dry, there have to be some hills and the ride can't be too far.   Riding to the post office or store on the island fits these conditions but at only 10 km for the round trip you don't knock off very many kilometers.

Last week end I went for a longer ride catching the ferry over to Vancouver Island.  It was a nice warm sunny day and I rode too far without eating and drinking enough so the last bit of the ride wasn't as pleasant as it should have been.  The last steep hill after getting off the ferry to Quadra Island was tough.  Had I been in my velomobile I would most likely have stopped and rested very briefly on the hill or gone at a very slow pace in low gear.  On the high racer I don't have the option of stopping without getting off(walking is uncool but can be necessary) and it is geared a bit high to go slow enough.  If I rode much slower balance becomes my main issue.  I did the same ride just a couple of days ago and felt much better.  A bit more liquids and some food did the trick.  I did have a good tail wind for the first part of the ride and was holding 38-40 kph which was great except I would have to ride back against it.

I finally rode the velo to the post office the other day.  The big surprise was that I was faster than with the high racer.  The trip ended up being 25:38 minutes compared to around 28-30 on the high racer.  I had assumed that I would be faster on the high racer as it is a bit hilly.  The reason the velo was faster is that I could carry a bit more speed from the downhills to the uphill.  The hills are fairly short but terrain is not would I would call velomobile friendly.  Not enough rolling hills just some short steep bits.  Curious to see if the Milan GT will be even quicker as I should have a bit more speed coming into the uphill bits.  Even just a few more kph cresting the hills would make a big difference.

Posted by velomobiles.ca at 10:10 PM No comments: 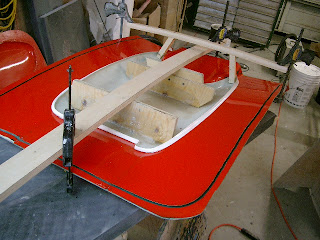 Here you can see a trial fit of the door plug into the mould before making the return flange.  I am a bit worried that I may have to redo this mould if it does not fit well enough.  Having to press the plug into the mould I made it off of is not a good sign.  It may well work just fine but there is no way of telling until I make an actual part and fit it to the shell.  Progress has now sped up a bit as I finished the kayaks I had on order.  Here is a picture of them and the Milan GT plug.  If the Milans come out as nice as these kayaks I would be very pleased. 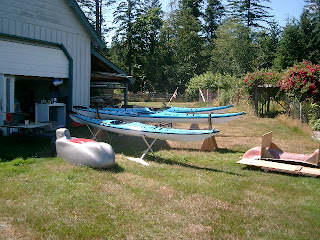 I have been walking by the Milan plug a few times every day for a while now.  The shape is growing on me.  When I first saw it on the internet I was doubtful about liking the shape.  This was until I saw it in person during ROAM.  It really does look much better in person than on a flat screen.  While some may like a simpler shape, the nice flowing curves remind me a bit of shapes found in classic old sports cars.  Depending on how the light hits it, it always looks a bit different.  My biggest decision will be what colour to build mine.  I am leaning towards the blue that is in the kayaks.  My second choice is white as it very visible and dresses up really well with a contrasting coloured stripe.  A distant third is a dark green much like British Racing Green.  The reason I won't go with the green is that it shows every little scratch.  Yellow is out as we build about 40% of our kayaks in it and while I like the colour I see too much of it.