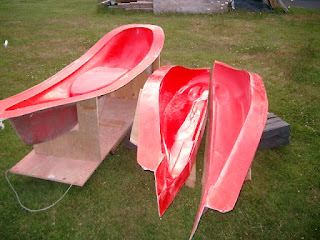 The three moulds for the shell lined up on the grass.  The top mould is to the left and the two bottom moulds on the right.  I have started sanding the right most mould as I used PVA as a release agent and it leaves some pattern in the mould.  Using  PVA insures that you do get a release.  I was not willing to rely just on wax for a release after touching up a few spots on the plug.  One more sanding in the mould gives me another chance at making it perfect.   I have built quite a few moulds but have yet to get one that is absolutely perfect. This mould so far is looking very nice. 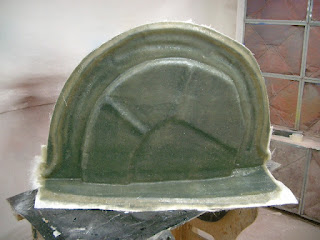 The rear fender moulds are now laminated and waiting to be trimmed.  I modified the recess for the chain a bit so it is possible to use just one idler if one chooses to do so.  I also added a couple of ribs to the fender so I can hoepfully build it a bit lighter as they will add considerable stiffness to the flat panel.  If necessary I can turn these recesses into tubes by filling them with foam and then laminating some material over them on the inside side of the fender.  The other option would be to just bond a flat sheet over the recess omitting the foam.  I'll try it without either of these steps to see if it will be stiff enough.  ﻿

So far I have managed to build the second mould for the Milan GT shell. 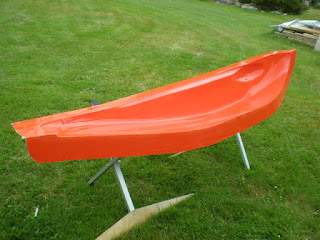 This part has been popped off the plug to clean up the parting line.  If all goes well the third and final mould for the shell will be hand laid up this week.  Just from looking at this mould it looks like I can avoid using peel ply in most of the two bottom parts of the shell so we will have a nice smooth finish on the inside of the parts like we do in the hulls of our kayaks.  It makes them easy to keep clean as the inside surface is as smooth as the nylon film used to bag the part.

It has been a while since I did this much hand laminating.  I can't see how folks do this on a regular basis.  I just detest it, having to wear a respirator, gloves, coveralls and deal with sticky gooey smelly resin.  I would much rather spend a bit more time and have it all enclosed under a bag.  Unfortunately for making moulds hand laminating is the most reasonable way to do it.

After this there are still some more moulds to make before we can build the first Milan GT. I may take just as long to make these smaller moulds as they almost all need to be made in two or three parts so I can vacuum bag or infuse them.  Some of them took serious contemplation to figure out the best way to make the moulds.  The good part about these parts is most of the moulds are small and much easier to deal with as hand laminates.
Posted by velomobiles.ca at 10:59 PM 2 comments:

Progress on the Milan GT

I am almost ready to build the mould for the top of the Milan GT.  It has taken a while to get to this point. 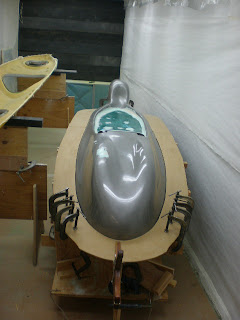 Here you can see the flange being made.  You can also see the cockpit opening has been closed in so I can vacuum bag or infuse the parts.  The wide flange is also necessary for this.   I have also starting on some of the smaller moulds.  The folks at Raderwerk send me a vey nice light carbon seat to use in the first Milan.  I have been very carefull moulding the seat making sure I don't damage it.  ﻿ 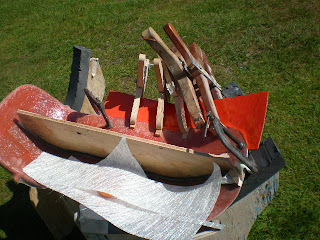 Once the mould was made I clamped a flange on so I could make the mould wider.  This is a multistep process that will take some time.  I also made a mould of the back of the seat as it has two stiffening tubes built into it.  My plan is to bag the front and back of the seat and then glue the part with the stiffening tubes onto the back of the seat.  This with avoid having to fill the tube shapes with foam.  I would be quite pleased if the weight ended up a bit less but will be happy if it ends up the same as the seat I was sent.  The seat I received was less than 700 grams without any holes drilled in it.
Posted by velomobiles.ca at 11:27 PM 2 comments: