We are working on some new signal lights.  The first set is now installed in the next Borealis V3.  Here are a couple of pictures of them being made. 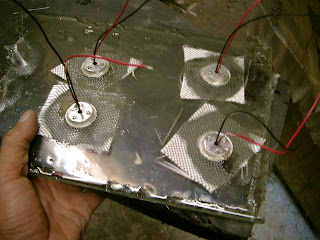 First I cast a layer of casting resin on a sheet of glass and laid a light layer of glass onto it.﻿ Once this had set I added the lights on top and bonded them in place with another layer of glass as you can see in the photo above. 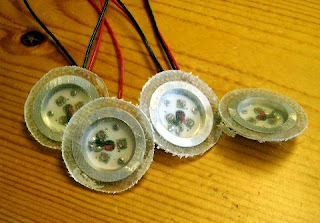 Here are the lights ready to install in the shell.  All four of them together weigh in at just less than 30 grams.  They consist of three 2 watt LEDs in each light﻿.  They do get quite hot so that is the reason for the extra metal bit they are bolted to.  It acts as an additional heat shink and allows air to circulate around the LEDs.  I originally considered just casting them in resin but they get a bit too hot for that as their temparture gets close to the HTD point of the resin.  If they get too hot they will have short service life.  This all seems quite a bit of trouble compared to just bonding in an off the shelf LED as is found on most velos.  The reason is that I don't consider these other lights adequate in all circumstances. They are not very visible in full sunlight.  These new lights are hard to look at from less than about 10 feet and are very visible even in full sunlight.  Another advanatage is that with a bit of extra work they can be mounted flush on the shell.  They draw the same amount of power that our present turn signal lights with 18 LEDs in them use.  Here is how they look once bonded in the shell with a bit more resin added to make them flush. 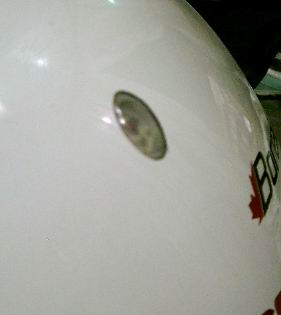 The better way to do it would be to make a mould so you cast the light with a little spigot sticking out that would fit through the hole in the shell.  Then you mask around the sticking out part and carefull sand it off to match the shape of the shell.  Sand to 1000 or even 2000 grit and polish.  Once you had done a few you could probably get the sanding and polishing down to five minutes or so.  This would also allow fitting to almost any velo.
Posted by velomobiles.ca at 8:32 PM 2 comments:

A few weeks ago I tried to ride from Maple Ridge to Quadra Island in one day.  I am eventually moving there and taking the velomobile part of the business along too.  The route I picked out is about 260 km.  This is just a bit further than the furthest I have ridden in a day before.  The plan was to get up early so I could catch the ferry from Tsawwassen to Duke Point on Vancouver Island.  This ferry runs every two and a half hours with the first one being at 5:15.  I was planning on catching the 7:45 as this should leave enough time to ride to Quadra Island before it got completely dark. I also needed to make it to Campbell River early enough to catch the last ferry to Quadra Island.

I set off around 4 am riding for the first while in the dark.  I was making good time and would have been half an hour early for the ferry when I had a mechanical problem about 45 minutes ride from the ferry.  Luckily I was able to get  replacement parts thanks to Brock at Cambie Cycles and was back on my way but missed the next two ferry sailings.  Now it looked like there was no chance of making it to Campbell River before dark.  Luckily I had a backup plan to stay with friends who were house sitting a place about 100 km from Duke Point.

I managed to find the bike route through Naniamo but lost it about 2/3 of the way through town.  As I was riding along a busy 4 lane road I passed a guy riding on the sidewalk who looked like a regular commuter. We were going slightly uphill as the time but we were close in speed.  He passed me and was just creeping way but looked back a few times so I was a bit motivated to catch him.  I eventually passed him as it flattened out a bit and then he caught a ride on the back of a truck by grapping the handrail on the back edge of the truck. I had almost caught him again when he turned off to a shopping mall.  The look on his face when he looked back was priceless as he was at least 200 meters ahead with the truck trick and thought he had left me behind. I was hoping to catch him and congratulate him on the move with the truck.  I was feeling pretty good at the time considering that I had everything I would take for self supported touring along except for the tent and cooking gear.

After Naniamo you have no choice but to ride the Island Highway which has a good shoulder most places until you can turn off onto Northwest Bay Road.  This avoids some climbing to get to Parksville and gets you to the old highway along the coast .   I rode along this until Qualicum Bay where I turned uphill with the knowledge that a meal was waiting for me.  The last 4 or so km were the toughest riding I had done for a few years.  It was steeply uphill and slow going with the extra weight I was carrying. I ended up stopping a few times and riding with no shoe (too lazy to stop and change shoes) on my right foot as it was quite sore.  Seems I can only ride 80 km before having to change to walking shoes rather than the clipless cycling shoes.  I much prefer to be clipped in as you can pull back some which is especially helpful when climbing.  I had the same issue on ROAM where I rode half the day in cycling shoes and the other half in walking shoes.  Needless to say the meal that night was right and the company good.  About eight and half hours of riding with some short breaks while riding.

The next morning I set out fairly early with the goal of reaching home around lunch time.  About a hour and a half into the ride I stopped for coffee at a small farm market and ended up buying some cherries and plums.  About 25 km from the ferry I started to look for some place that had ice cream. I passed a mini golf center and noticed it had an Island Farms ice cream sign out so I stopped, turned around and went back.  It was a worthwhile stop as I had a chocolate mocha milk shake made with chocolate milk--highly recommended!!!  Just as I was leaving after the milkshake I was stopped by a fellow in a pickup truck.  It turned out to be one of my employees from over twenty years ago.  We had a good chat and agreed to get together again later that weekend.  He also stopped on his way back for a milkshake as I recommended  and agreed that it was worth stoppinh for.  At Willow Point I noticed the ferry crossing back to Campbell River and thought I had missed that one for sure as I was still 10 plus km from the ferry.  But I rolled up to the ticket booth in Campell River, paid the fare and rolled right onto the ferry.  I was kind of hoping for a bit longer rest before tackling the ride up and  across the island. the ferry ride is only about 10 minutes.  The last kilometer of the ride is very pleasant as its all downhill.  All in all a good ride with about 5.5 hours of riding with a couple of longish breaks.

I think this ride is possible for me in one day.  It would help to start out with a good nights's sleep and not have any mechanical problems.  Maybe the option of riding to Horseshoe Bay instead of Tsawwassen might be better as it takes quite a while to ride back to Naniamo from Duke Point.  Passing thruogh Vancouver should be pretty easy early in the morning even if it means riding a few more hills.  I'll try this next time for a change of scenery.  Also having an empty velo(lighter) would help especially at the end of the day when you are tired.
Posted by velomobiles.ca at 9:37 PM 1 comment: