Another longer ride and observations

A few days ago I took the Milan for a longer ride on Vancouver Island from Campbell river to Comox.  When I left the house, I had the hood on but ended up removing it on the ferry and putting it in Jan's car.  The reason for taking it off were twofold:  first, it was annoying me having it on and it wasn't raining much nor was it supposed to (forecast said only a couple of hours for less than a mm).  I figured this should be OK as it was warm enough and all that could happen was my getting wet.  The second reason was I was riding with a friend to whom I had lent my Borealis.  He didn't have a roof so why should I!!  I met him along the road and off we went.  Well it went from just a few sprinkles to a downpour an hour later.  Just as we got rolling along a slightly downhill section, that goes on for about 15 km, I got a flat.  Changed out the tube and on we went.  I did get a bit chilly doing this but warmed up once we had to climb some hills heading to lunch at a pub. 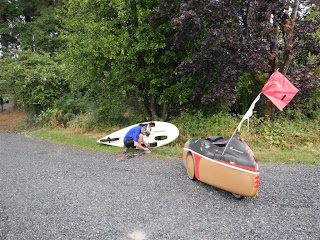 Before the flat I had given up leaving my glasses on as it was just raining too much.  The rain also slowed progress quite a bit.  I am sure on a sunny day I would have ridden this section at 40+ kph just dancing lightly on the pedals--just a perfect section for a velo.   Will need to ride here again.

The conclusion drawn from this ride was that there is a need for a easily deployable roof that stores inside the velo.  What I am thinking of is a tensioned fabric structure with some batons in it that can be put on in a minute or less without getting out of the velo.  If it works out it would also work nicely as a sunshade.   The Flevobike roof would do this but I would prefer the roof to be wider and to pack smaller.

Managed to find a spot that was suitable for a roll out test.  It is a few km away but one of the better smooth stretches of pavement on the island.  A pull out on one side the of road for turning around  and a T intersection an couple hundred meters from the test section to turn around and come back.   Only issue is the road has a slight curve in it but that didn't seem to matter.  The test section I used was about 100 meters long with a slight downhill to start then a tiny bit of flat and then gradually uphill.  I would reach 12-13 kph coasting down then roll to a stop.  Testing equipment consisted of three sticks about a half meter long.  At the top of the hill I laid one of these sticks in the bushes on the side of the road.  To start the test I would line up so I could sight along the stick and then release the brake.  The second stick was  used to mark how far I rolled out.  The third stick was to mark any variation from the first roll out.  I did three roll outs with the setting I arrived with.  All were within about a half meter.  I reset the toe in by one turn and did it again.  The difference was a half a velomobile length from the previous test.  I did this a couple of more times just to be sure and it was always the same.  The test procedure was very repeatable.  The end result was that I did not have front wheel alignment set optimally.  After a few more trials I narrowed the setting down to two possibilities.  While they were close I always rolled further with the one setting by more than the margin of error.  The real question is whether this effort was worth it.  I very much suspect so just from the fact your tires won't wear out as quickly if the setting was off.  Even just using the difference in distance rolled this would amount to at least 10 meters per km.  It is most likely considerably more when you apply effort or coast down hills(go faster).  Certainly enough to be noted by a riding buddy if they are slower than you or you are having trouble keeping up. A small improvement in the test procedure would be a better way of measuring the start position.  I will try a round tube taped of the side of the velo which I sight down to a line on the road.  This should get the start point to within a cm or less.
Posted by velomobiles.ca at 10:54 PM No comments:

Last weekend I had the chance to go for a longer ride on the much flatter Vancouver Island.  A friend was visiting and I rode down to Courtenay with him.

The day before, I had spent some time trying to improve the alignment of the front wheels.  I did a bunch of roll down tests using my Garmin to measure the speed.  I picked a hill with a flat run out which then goes slightly uphill.  The other criteria for the test was that I could turn around without getting out.  Top speed before slowing down was around 32 kph.  The results were quite variable for two reasons.  A bike computer would most likely do a better job of measuring max speed.  The road surface was quite rough with a couple of dips/bumps which changed my speed.  While I got close to the same results on trials at the same toe in, they weren't good enough to convince me it was reliable.  I ended up setting just a tiny bit more toe in than before.  I will need to come up with a better site to do the tests.  Maybe I'll just try a roll out test measuring how far you roll out before stopping.  This is in keeping with the KISS (keep it simple stupid) principle .

Back to the ride.  Dave, riding the bamboo bike he built, was a bit faster than I was uphill.  He was also towing a BOB trailer.  I suspect he is in much better riding shape than I.  I haven't ridden much lately but plan on changing that.  Once or twice, on very slight  up grades or the flats I was quicker.  Downhill was marvelous.  I will now have a new rule:  once over 40 kph just coast and enjoy the ride.  This is unless you are trying to catch someone or drop them.   The first interesting thing that happened is I got passed moving to the main traffic lane from the shoulder.  This is the second time this has happened in the same place.  There is a down hill where I pull into the main traffic lane from the shoulder once I am at speed of traffic.  There is normally debris on the shoulder at the bottom of the hill.  The hill has a left turn lane on it so it is at least three lanes wide.  This is the second time I have been passed here and both times I was 5 kph over the speed limit.  It seems cars just need to get by if you are travelling at or close to their speed.  I have noticed this before.  From now on I will be more careful when travelling at about traffic speed.  After the hill I just coasted to a stop until Dave caught up.  It seemed that it just coasted forever as I must have gone at least a km before coming to a stop.  I guess my small adjustment of the toe in was an improvement.  Part way to Courtenay there is a Pitch and Putt Golf course that serves ice cream and milkshakes.  The chocolate/raspberry ice cream makes a great shake especially with chocolate milk.   A little further along I noticed a small sign for Coastal Black winery that had an even smaller sign indicating that they have a Bistro.  Had I been driving a car I might have missed this.  There was another sign for a winery closer to Courtenay--places to visit on future rides.  Just a few km before I turned back, the road flattened out and was slightly downhill.  I just seemed to fly along here just pedaling lightly.  On the way back I did stop at Coastal Black Winery.  Sampled some Mead and had a pizza made in their wood fired oven on the patio--worth the stop.  Rode back to the ferry and then home.  Total for the day:  a bit over 110 km.

The next trip to the store and back was quick.  Shaved a minute off without really trying.  So the toe in adjustment was positive.  It helps it you also inflate the tires.  On the longer ride they could have had a bit of air added.  It would have been an even quicker ride and I would have had longer rest times waiting for Dave to catch up.  I am now more convinced than ever that a velomobile makes a ideal touring machine.
Posted by velomobiles.ca at 9:38 AM No comments: