Some news about the Milan SL

I have come up with a different way to hold the door in place on the SL.  I am using some shock cord to latch it at the front and back.  The previous method had a hinge at the front that seemed to rattle some at times.  It was also hard to remove and replace if you wanted to remove the door to work inside the velomobile. 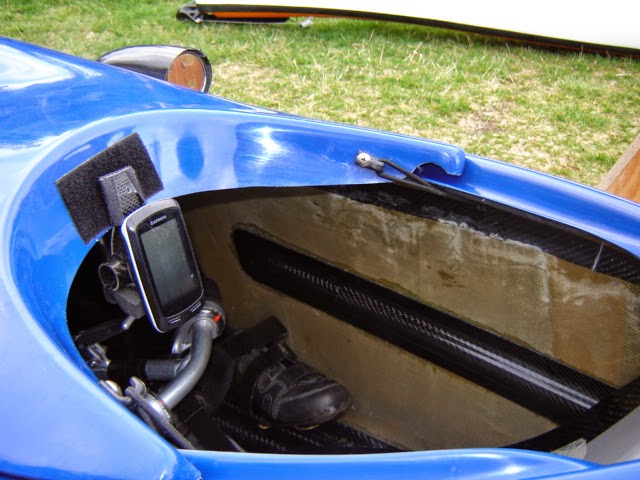 The shock cord at the back edge hooks around a plastic hook bolted the the door. 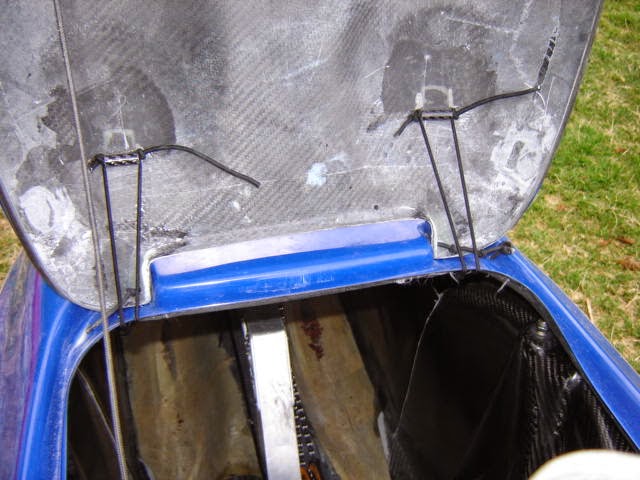 The same idea at the front but I will be changing it slightly so its easier to reach.  This was the second attempt so the final result will be neater. 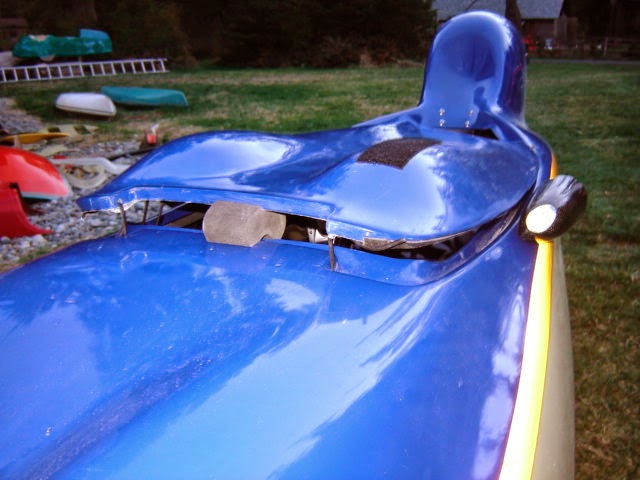 The additional advantage of being able to prop the front edge open for ventilation or for use as an air brake for long descents. You would most likely had to have it open more for much braking effect.  It just a rocket going down hill. 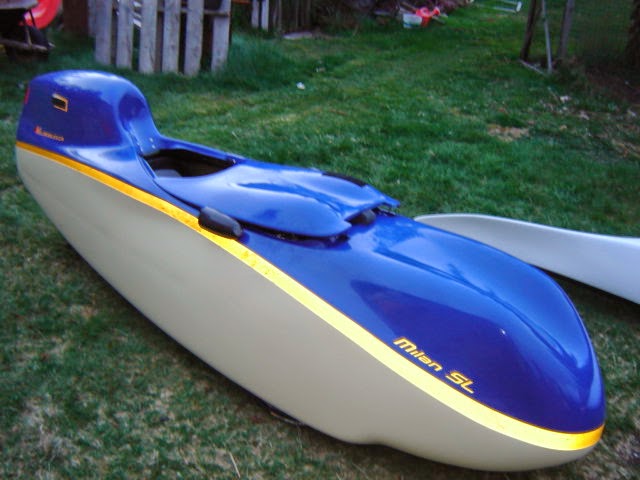 I went for a ride this evening checking out the local time trial course.  I did ride a time trial on it yesterday so had another go at a slightly slower pace to figure out where to optimize my effort.  On yesterday's ride I got it slightly wrong in not attacking a slight grade enough and lost some speed. Even though I had ridden this section quite a few times I didn't realize how much it could hold you up if you had your effort wrong.  I guess this is the difference between racing and just riding.  The slower ride was about 30 seconds longer than the actual time trial.  During the time trial I had a few folks in front of me to catch so the rabbit effect was in full force.  I did the course in 9:47 with an average speed of 44.27 kph. The course is a bit hilly and not much in the way of rolling hills that favor a velo.   Right now I have a rather low high gear in the SL mostly so I also have a very low gear for climbing the hills here.  A bit higher gearing would have helped some but the engine needs to be more fit to make a real difference.  It wasn't too big of a surprise to set a new course record considering the aerodynamic advantage of the SL.

I am getting using to the tiller setup in the SL.  I was a bit shocked to see a max speed over 83 kph as I braked  some to keep my speed down.  I will continue to ride the SL and then switch back to the GT once I have changed out the rear fender.  The new three layer fender with carbon and Bio-Mid is much less noisy than the glass and Kevlar one.  They both ended up weighing about the same but the carbon/Bio-Mid one  is much nicer and will even go into the glass versions of the Milan.  One does get spoiled easily.

An Xseam of 45" or more means you will not fit in the SL.  With very short cranks and an extended BB position it may be possible to fit slightly taller but I would recommend a trial fit.
Posted by velomobiles.ca at 11:40 PM 4 comments:

Back from the Left Coast Velomobile Gathering.  Lots of driving, not so much sleep and some excellent riding.  A very fun weekend.  Many thanks to Craig and Vicky for hosting the event.

This was the first time I could ride the Milan GT with other velomobiles to compare performance.  While I knew that the Milan was quick I had no real reference point.  After the first half of Saturday's ride I was more than a little pleased especially considering that I have not ridden much in the last few months.   Now I understand why Markus would start later in the mornings on ROAM and come whizzing by.  The folks at Raderwerk who designed the Milan have succeeded in building a very fast comfortable velomobile.  I was impressed by being able to climb a gentle slopes at reasonable speed.  Carrying momentum up the next hill was great fun.  On gentle up slopes the saved up kinetic energy sure cared one a long ways.

At the LCVMG there were a couple of other velos that were quite interesting.  I have always liked the sort of retro look of the Allweder.  There was one that was polished up to a high level.  It sure looked nice.  I checked out how it was constructed and it's amazing what can be done with aluminium.  There were also two chloroplast velos built on ICE trikes.  Nicely built and a good way to get into velomobile if you already have a trike.  While not quite as fast as a Quest or Milan they provided most (90-95%) of the benefits velos offer.  You would be hard pressed to go back to the bare trike after riding these.

Here are a few of pictures at the Avila beach on the second day. 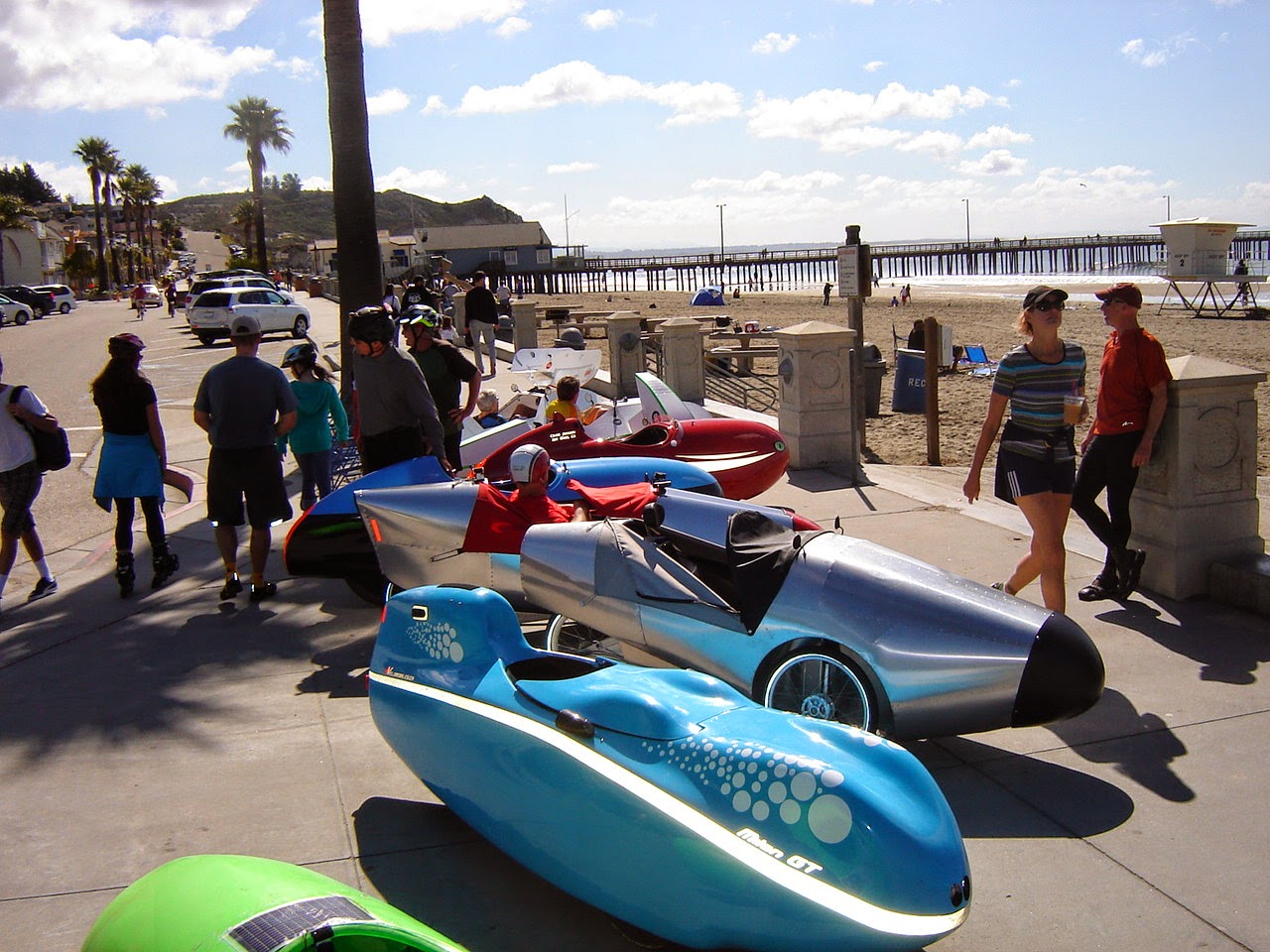 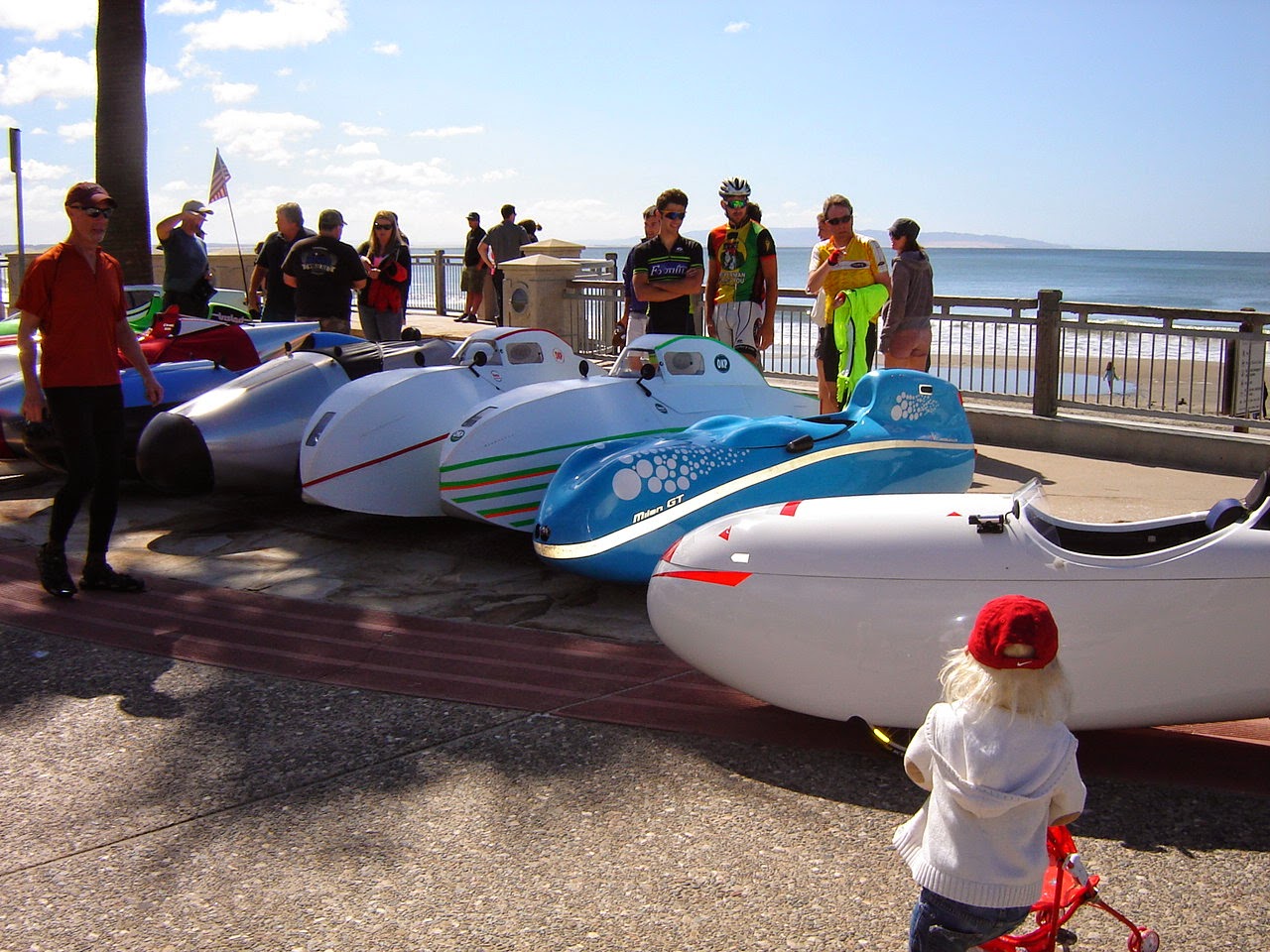 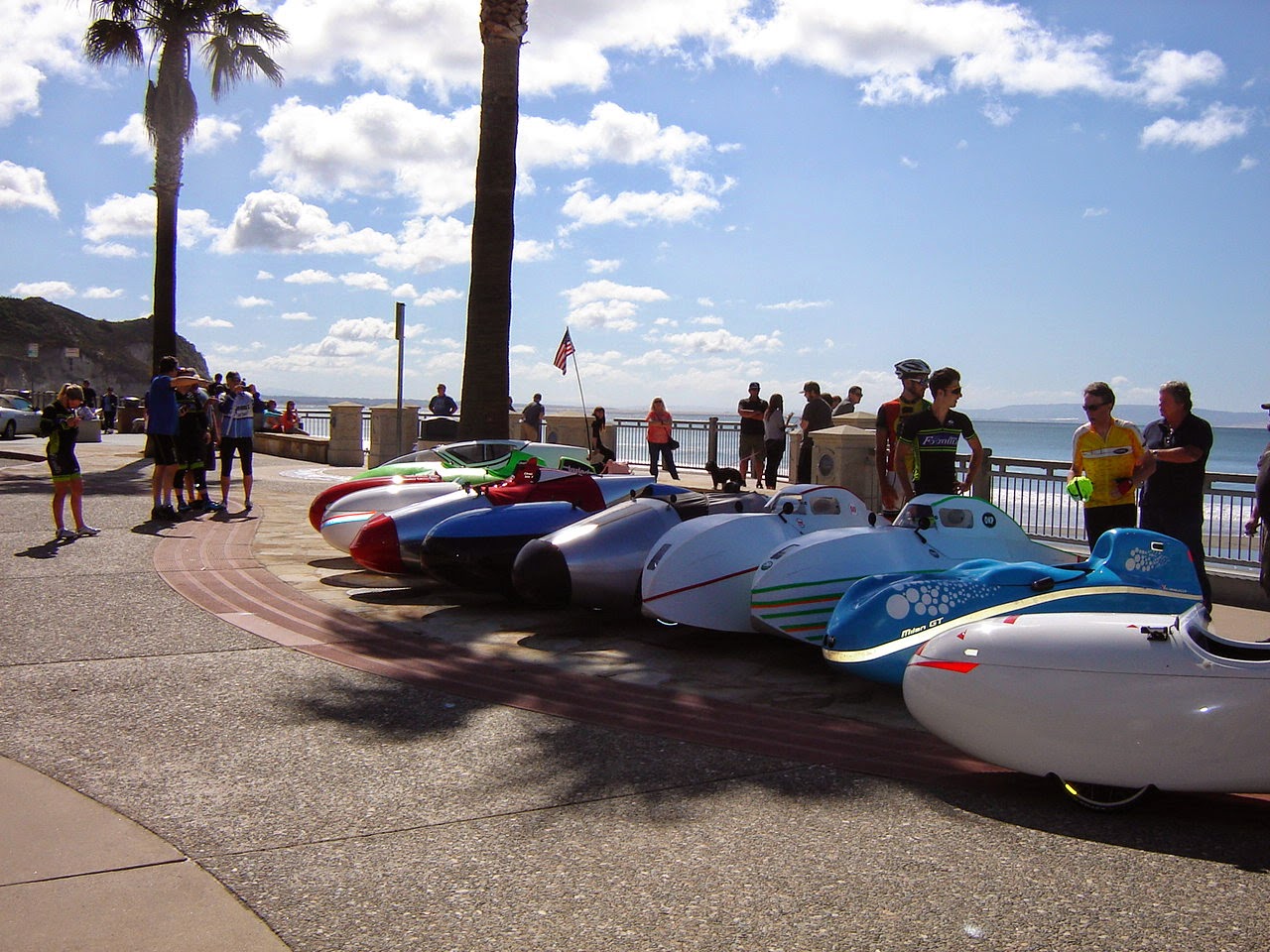 The previous day I managed to scare myself at bit.  I actually overdid it a bit and ended up going down a hill too fast.  I was reluctant to do anything but let it run out.  I didn't have my GPS on but was going at least the speed of traffic(55 mph if they were going the speed limit, doubtful at the best of times) and certainly a lot more than the 85 kph I have been at before.   Lesson for the future about keeping speed in check. I didn't actually have any trouble controlling the Milan GT it just felt way too fast, enough so that I was even reluctant to apply the brakes. I have since practiced braking from fairly high speed and am now more comfortable doing this.

Here are more pictures of "Bubbles".  It  got stuck with this name before it even made it off the car. 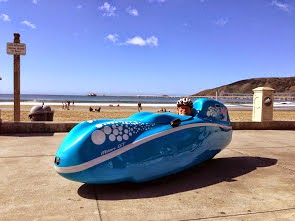 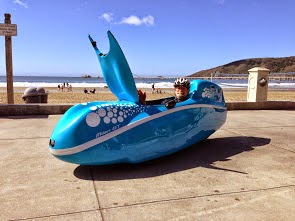 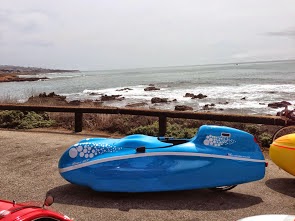