There has been lots of discussion of rear suspension in velomobiles of late.  This has got me thinking about how I should setup the new velo with rear suspension.  For what I observed while riding the first few days of ROAM some improvement here is warranted.  This is especially true when crossing rumble strips here in North America.  I guess they don't have these cycling unfriendly things in Europe.  If they do they are probably a better design and  much less of the hazard.

The first time I crossed a rumble strip was on the 200 km brevet.  I was approaching a bridge on the highway riding on the shoulder which was reasonable wide and clear of debris.  As the road neared a bridge it narrowed forcing me to cross the rumble strip.  As it was downhill I was moving at a good clip and just as I was going to cross traffic was approaching quickly.  I slowed a bit to ease in behind a car and  crossed without incident.  The rumble strip make a horrible noise as the front wheels crossed and the rear suspension worked well when it crossed.  I was more worried about merging with traffic than the rumble strip.   After this I didn't worry about crossing rumble strips until I read about trouble other folks were having with them.  On the second or third day of ROAM I saw Bram momentary loose control when he ran onto the rumble strip avoiding debris on the shoulder.  This was a particularly bad stretch for bits of wire and tire chunks on the shoulder which had me keeping my figures crossed that I didn't get a flat.  Anyway Bram regained control but he just touched the guard rail putting a mark on the side of his Mango.  There were a couple of other problems like this.  The heavier and more experienced riders didn't have any issues.  The velomobiles with two sided swing arms didn't seem to have trouble.  Now there are a couple of folks working on a better rear suspension strut.  From early reports the new suspension works well in improving handling.

I am thinking on doing it quite differently.  At present velomobiles have a strut goes from the swing arm up to a brace that goes from one side of the velo to the other.  This  stiffens the shell by linking the sides together and  attaches to the head bump.  I don't have this setup in the Borealis where the trike has the rear suspension built into the frame.  The suspension strut  (elastomer) is only about 10-15 cm above the floor of the velomobile.  I do have  "L" shaped bulkhead that extends up the sides to stiffen the shell.   Rather than use exactly this I am thinking of something that is more like the rear suspension on the Scorpion trike.  It uses a  common bike shock that is very adjustable for the rider's weight.  One advantage of doing it this way is you can build a very stiff floor to attach all this to. Combining this with the seat mount bonded to the floor on which you could stand anywhere and the potential for some weight saving  make this approach worth trying.

There may end up being two versions one with a 20" rear wheel and another with a 26".  I like the concept of only carrying one size of tube and tire especially for touring.  Beside with the smaller wheel there is more storage space.  All things being equal the  smaller size may weigh less.   I suspect that a majority of riders would prefer the larger wheel for its perceived advantages.
Posted by velomobiles.ca at 10:26 PM No comments:

A bit more on the new Velo 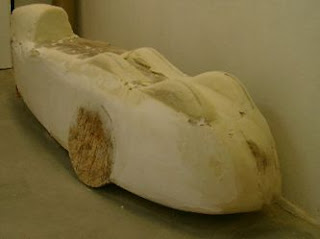 ﻿
Did a bit more on the new velo while waiting for some electrical work to be done in the new shop.  At first I though it was looking quite big until I lifted it off the sawhorses I had it sitting on and put it on the ground.  Once at ground level it was looking smaller than most velomobiles.   The amount of ground clearance at the front is actually larger than it looks as the shop floor slopes up to meet the doorway.   At the present size of the front with the bottom bracket at its present height there in no need for footholes or bumps to have heel clearance.  My shoe size is 44.   This way you can leave the bottom flat and very clean aerodynamically.   The bump behind the head is still too large and the shoulder width may be a bit excessive.  I will build the other side to match and then take a shape off the outside.  Once I have this layup done I can cut it into some parts so it will come off the pattern.  Then reassemble it and sit inside it to check out all the clearances.
Posted by velomobiles.ca at 10:19 PM 2 comments: