I now have three more moulds to make before I am ready to start on building the first Milan GT. 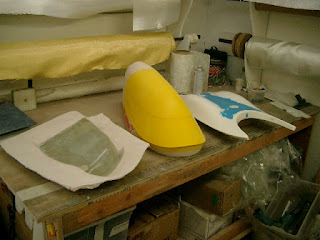 The one of the left is the storage tray that mounts in front of the left side wheel housing.  There isn't one available for the right side but if I find it really useful I will make one for that side too.  The down side of this is that you end up with more stuff as once its in there you do tend to forget about it.  Both of these storage areas together are about the volume of a mid size pannier.  The middle one is the hood.  It should be fairly straight forward to make once we have the mould with a flange on it.  The right one is the door.  It will need to be a two part mould as it has some undercuts.  There are three different sizes of door but I am starting with the one with the biggest bumps.  The others can follow later.   Same applies to the small mouldings used to mount the side stick steering and electrics.

It seems to have taken forever to get to this point.  There is still a lot to do before the moulds are ready to use but that is just sanding and polishing.  I will be quite happy to see the end of the sanding as its boring to do but you do need to be careful to do it properly.  More skill required than you would think at first glance.  I can only sand for a while each session as my hands an elbows can only take so much.  It's not so bad if you are outside on a sunny day.
Posted by velomobiles.ca at 12:34 PM 4 comments:

Best seat at the Movie 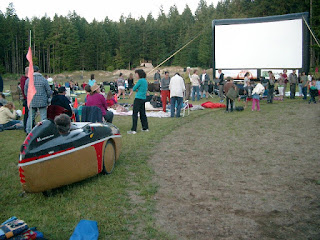 I arrived early and had to wait a while until the movie started.  The velomobile was a big hit with the kids.  ﻿ 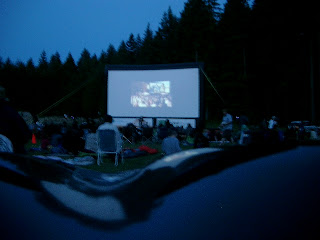 Testing the system and waiting for it to get dark.  I took a picture in the dark but it didn't turn out very well.  The carbon top just disappears in the dark.

We had the chance to go see a movie at the Blenkin Park next to the community centre on Quadra Island.  I ended up with the best seat in the park.  Being inside the velomobile was quite an advantage as it cooled off after dark.  Folks sitting in chairs were wrapped up in blankets and wore toques ontheir heads.  I was OK with just a sweater on and my jacket draped over me.  I actually nodded off for a few minutes so I couldn't have been too cold.    I would not recommend sleeping in the velomobile but it is possible in a pinch.

The screen is an inflated structure about three stories tall.  It only takes a few hours to setup.  The Coastal Cummunity Credit Union is the main sponsor for the event.  Luckily the weather co-operated --the week before it had been raining and a few degrees colder.

The ride home was interesting as my lights failed to function properly.  I had forgotten to plug a battery into the E-werk and it doesn't work properly without it.  I have a Son dynamo which normally charges a battery and then runs the lights.  I had tested to be sure I had lights before I left as I had charged a battery and turned them on.  The lights would come on and then turn themselves off after about five seconds.  Luckily it was clear night and the moon was just rising.  I did have the flashing rear taillight working so cars could see me from behind.   In the last half on the ride no cars passed me and I could smell the honeysuckle that is in bloom all over the island.  One does go rather slowly downhill when you can't see too well.  Some spots where the forest was tight on both sides of the road were pretty dark.  A mini adventure not to be repeated.   ﻿
Posted by velomobiles.ca at 1:06 PM 1 comment: