New chain covers and another ride 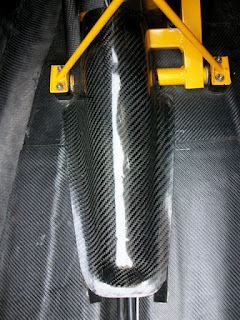 The new cover for the chain under the seat.  Raderwerk will send this pattern along with the patterns for the Milan SL. 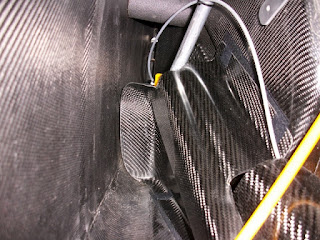 The other half of the cover, this one covers the front of  rear derailleur and prevents stuff from getting caught in the chain.  I already had my repair bag slide back inside the velo and had to stop to move it.  This should also make loading gear much easier as it will no longer be able to interfer with the mechanical bits.
I have had a couple more rides in the Milan.  It feels like it has lots more potential to really zoom along.   Still quite a few details to finish up.  I am presently working on the seat moulds, small mouldings for the mirrors and signal lights.  Now that I an almost finished I can see that it will be very nice once its all done.
Just before leaving the community centre﻿ I saw a couple of cyclists ride by heading the direction I was planning on going.  As I got going a couple minutes later I was not expecting to see them again.  It is mostly downhill for the first while and I got up lots of speed, enough that I thought about braking.  A bit of up and then some more down followed by some corners and then an uphill section where I end up in the lowest gear.  As I came around the last corner the two cyclists were just in front of me.  We all rode up the hill together and chated some.  At the crest of the hill they pedalled away to pick up some speed for the downhill.  I just coasted and was soon overtaking them, then they faded from sight behind me.  There is no point in pedalling to pick up speed at the top of this hill as it has a couple of corners where I need to brake.  Maybe as I get more used to the Milan I can just let it run but I doubt it as the road is not banked enough.  I stopped for coffee and before getting coffee there was a some crowd gathered around the velomobile. One fellow talked over and remarked somewhat touch in cheek "what are we all doing standing around looking at the Harley".  The two cyclists I passed were there taking a closer look and we all just all grinned. 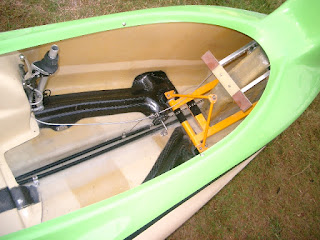 One thing to note on the interior is that I have not painted the inside black. I like being able to see into the laminate when vacuum bagging the parts. The primary reason for painting the inside black is to hide the dirt that gets caught in the nooks and crannies of a hand laminate. The other one is to hide any tiny bubbles in the laminate. The interior surface from the wheel wells back is quite smooth from the bag. From the back of the wheel wells foward I used some peel ply to simplify bonding and deal with the bag lines due to the complex shape.  I have noticed that this area does stay as clean looking. 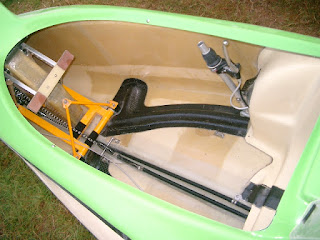 View of the other side. One small modification I am making is to change the rib at the back where the rear suspension bolts on. It just fits now but a bit more space so it can't rub when the swing arm moves is a good thing. 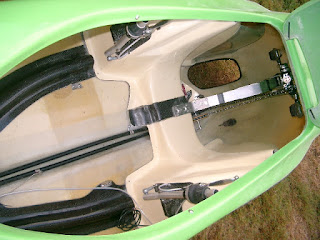 The view forward. Reverse gear is with your left foot. Before I always used my right foot but the adjustment was not difficult.  Note the wires hanging down for the brake light from the right brake lever.  I haven't added the signal/brake lights yet.   ﻿

Second ride in the Milan was to the store and back.  Fastest round trip yet.  It was about two minutes faster than the Borealis.  Most the the gain was in carrying more speed up the next hill. There is one short steep section of downhill before the first real uphill going to the store.   I was able to crest the hill in the big chainring.  The only problem with this section is that just before you reach the bottom of the hill there is a road coming in from the right.  Just a little way up from this road on the hill there is a dip which hides you from drives turning onto the road.  I am careful turning onto the road even in the car as it is hard to be sure no one is coming.   I am cautious in the velomobile approaching this intersection as the velo is lower and even harder see than a car.  If that intersection was more visible I could probably gain 10 kph.  The way it is now I can only go for after the road which only leaves a few meters of downhill to gain more speed on.  Never the less I did get to 71.2 kph and the Milan felt rock solid.  I didn't think I was going that fast but the GPS confirmed the speed.  On the way back just a ways before my driveway I was held up a bit by a car turning around.  He looked lost as he turned around in my driveway. 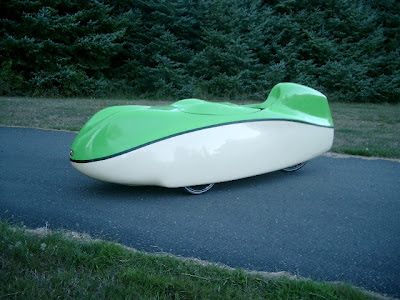 I had the first short ride in the Milan GT yesterday.  Brock from Cambie Cycles rode up from Vancouver and helped set up the drive train.  After this and some lunch, we rode around a bit to compare the Borealis V3 and Milan.  Coasting downhill, they are about similiar speeds until you get above 30-35 kph.  At this point the Milan is much quicker.  I suspect that below 30 kph or so most of the resistance is rolling resistance.  Once over 40 kph, the sleeker shape of the Milan comes to the fore.  We rode a little further than Brock really wanted to just so I could compare speed up a hill which has a nice downhill section just before it.  At the top on the hill I was still in the big ring moving along quite quickly.  The extra speed on the downhill compared to the Borealis accounts for the higher speed at the top of the hill.  I'll have to ride to the store and back to see how much faster the Milan is.  I am a couple minutes quicker on the round trip with the Borealis (around 25 minutes) than with my high racer.  If I could save a minute or two this would be lots.  After this short comparison ride I rode with Brock back to the ferry.  Going up a couple of hills I really noticed that the Milan is very stiff.  I couldn't feel any flex so the bit of reinforcing with carbon fiber makes great sense.  Now I just need a bit lower gearing for my hills around here.  They are pretty short about 6 minutes max but about 7-8% with steeper sections. 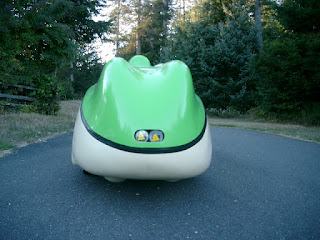 Now that I have had the Milan sitting around I have got quite used to the shape.  Everytime I look at it I see something different.  The nice rounded shapes and bumps are really likeable after you get used to them.  ﻿ 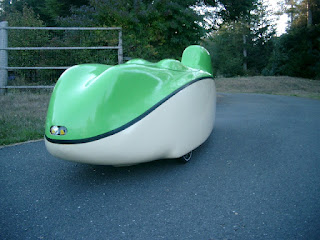 Now that I have it rideable I can mention the weight as it is no longer just a calculation.  It now weighs 32.3 kgs with 90mm drums.  This is essentially a glass laminate with a small amount of Kevlar and carbon fiber used where it benefits most.  Had I used the lighter tires and wheels with 70mm drums the weight would be just under 30kgs.  I feel it is still a little bit overbuilt as I overdid it in some spots.  In fact to see how stiff it was in front of the door where there is a lot of reinforcement, I was able to stand on it without even any funny noises.  It wouldn't have been good to fall off and damage it before I even had a chance to ride it.  Standing on your velomobile is not a recommended activity!!   ﻿
Posted by velomobiles.ca at 1:14 PM 6 comments: