I now have the new version of the LED lights here to try out.  They are similar to our old ones which were no longer available.  My supplier did eventually find someone that could make them up provided I bought enough.  Luckily the minimum number is quite low so I could get some to try out.  The previous lights were mounted of the 20 mm aluminium disk that acts as the heat sink.  The new ones are now mounted on aluminium strips so they are lots easier to install. 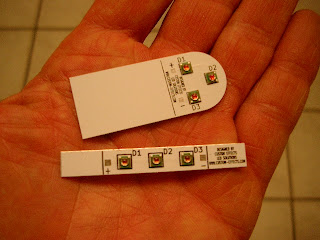 The longer skinny one is to fit in the back of the Milan.  The trailing edge of the Milan is not very wide so they are only .3" wide.  I will cut a hole in the trailing edge and then bond in a clear casting resin block with the LED strip attached to the back of with air space so the heat sink function of the aluminium strip still works.  I will then round the block to match the shape of the velomobile.  Some sanding with fine grits and polishing will finish the job.   I thought of just casting the lights into a block but they get a bit too hot for that.  The LEDs in the long narrow strip are red and the other are amber.  They are each 2 watt LEDs so each light will be 6 watts. 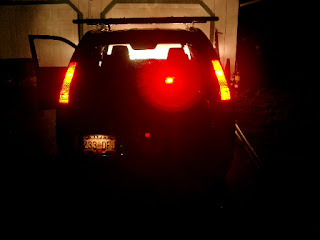 Here you can see the lights in comparison to the tail lights of a Honda CRV.  The camera makes the LED in the middle look a bit less bright than it really is.  When I picked up the lights off the back of the spare tire I touched the aluminium strip and got a small burn for my trouble.  So they get plenty warm. 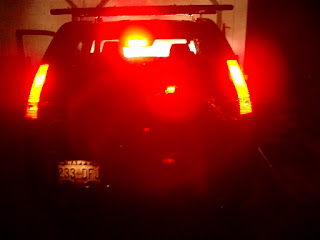 I have started on building a rib to stiffen the front top section of the Borealis.  This has come about as a result of the  how well ribs I made for the Milan worked out.    Right now the front top section of the Borealis is stiffened by the lip at the back end of the section.  I put a fair bit of material in the lip to make it stiffer but with the rib I can reduce this some.  This reduction should almost account for the weight of the rib.   The only real negative I can see so far is the extra work involve in making and installing the rib.   Hopefully there will be more orders for the Borealis to justify making incremental improvements.  Here is the picture of the beginnings of the rib. 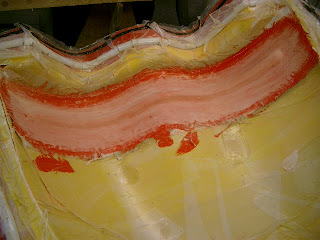 Rather than pulling the part out of the mould I just built the rib on top of the bag film.  I will pop it loose from the nylon film on top of the part after it has cured for a couple more days.  Then just more sanding and a mould can be built.
Posted by velomobiles.ca at 10:35 PM No comments: