I finallly got to try out some magnets that have been gathering dust on my workbench at home for a few months.  Instead of using the velcro I used some magnets to do the job.   Suprise surprise they work. 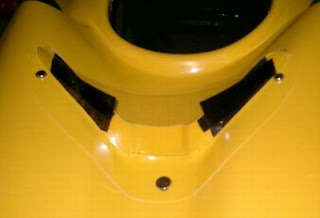 In fact just the one large magnet will hold the deflector in place at 80 kph.  I added the smaller magents just in case the large one didn't quite do the job.  My source for the magnets is here http://www.leevalley.com/en/hardware/page.aspx?p=32065&cat=3,42363,42348&ap=1.
I am using the 3/4" size for the larger one and 1/2" for the smaller ones.  I have a magnet glued on to the deflector and another one glued  to underside of the door.  I will try and see if three of the small magnets have enough holding power.  If they do the next step would be to use steel washers on the underside of the door rather than more magnets and see if that still works.   The really neat part is that the deflector just jumps into place when you get it is close to the right spot.  The door looks lots better without the Velcro stuck to it.
Posted by velomobiles.ca at 11:06 PM No comments:

I decided to make one last improvemnt on the V3 before starting on the first order.  In the picture you can see the black line drawn inside the wheel well. 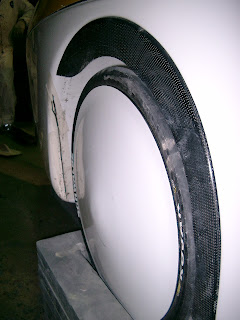 I will change the shape of the mould so the  line is now the outside of the shape.  This will reduce the area exposed to airflow behind the wheel a bit. 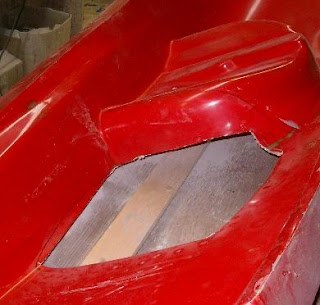 Here you can see the mould cut away waiting for the new shape to be inserted.  Once the new shape is held in place I will rebuild the mould over it.  Then comes the tricky part of matching it to the existing mould.  Mostly its a lot of tedious delicate sanding.
Posted by velomobiles.ca at 11:00 PM No comments:

I have been riding the Borealis V3 for some time now.  This first one was built using carbon/vectran hybrid material for the outside layer and kevlar as the inside layer.  It ended up a bit heavier than I had hoped but its quite robust.  It will be able to survive lots of abuse.  With suspension all round it is still under 80 pounds.

Some of the improvements on the V3 are going to be incoporated into the V2.  The new signal controller is much simplier and more robust.  It now uses relays for the signal lights and has mostly soldered connections.  The running lights can be left on  or they can be turned off to conserve power as the lights come on instanly when you restore power.  Before the chip in the contol module had to boot up first and this took a few seconds.  The wheel fairings developed for the V3 will fit the V2.  The bulkhead and rear fender for the V3 will also work in the V2 as they are a lighter and better way of attaching the rear of the trike to the fairing.


I can now finally see how the finished product will be.  Once the new rear fender is done we will be able to take orders.
Posted by velomobiles.ca at 11:49 PM No comments: