I made a change to the floor of the Borealis V3.  My V3 has an occasional squeak I haven't been able to track down.  Brock thinks he found the source so I ended up adding some more clearance around the frame.  The Sprint has a couple of welded on bits to better manage the cable housings that weren't on previous models.  There is some clearance now but it is not a lot.  Below you can see the cut outs in the mould with chunks of the modified plug in place. I will gel coat the areas then laminate some material over the gel coat.  Once that is hard remove the plugs, sand and then polish. The sanding is a bit tedious but lots less work than building a whole new mould. 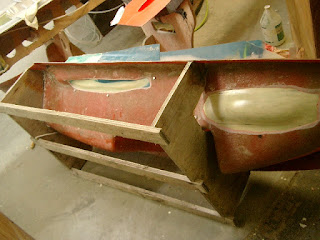 The other oops has to do with the rain gutter in the Milan.  I made the second side which was a bit different in shape to the first side.  I ended up liking the second shape better so I am now changing the first one.  Same process as above but a lot smaller mould. 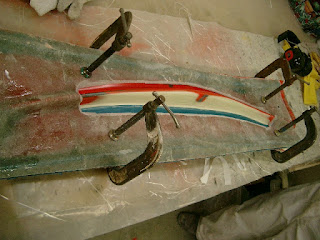 The beige coloured material in the cut out is the change in the shape.  I straightened out the shape so it more closely matches the shape of the hatch opening.  Not a lot of change but right and left sides were different enough to bug me.
The Milan has been sitting outside in the rain for a few days and the rain gutters work as planned.  I did end up adding some drain holes in the floor so any other water that gets in can drain away.

Glueing the Rain Gutter In 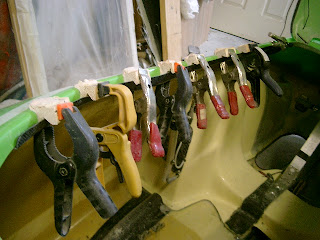 The gutter being glued in.  I had to make some special blocks to clamp it in place.  Just barely had enough spring clamps to do the job. I will most likely have to get more so I can glue both sides in at once.  The adhesive I use takes a few hours to set.   Here's what it looks like once the clamps are removed and the drain tube installed. 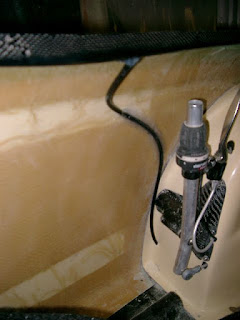 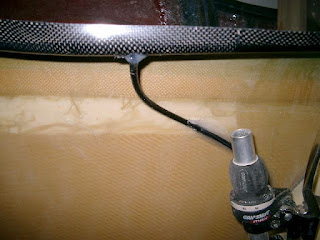