Ride with another Borealis velomobile

Went for a ride today with a friend.  He used our demo Borealis.  We met up at the shop and then rode to breakfast.  Had a very leisurely breakfast and then headed out for a longer ride.  We did a fairly flat route out to Pitt Meadows and back to Albion.  It is very unusual to be able to ride with another velomobile here as I mostly end up riding by myself even when riding with other cyclists.  The velomobile just has a different speed profile than regular bikes so if I want to ride with others I have to go slowly on the flatter or downhill bits and work  harder on the uphills so we are similar in speed.  We explored a couple of spots I hadn't been to lately and they were passable with a velo.  One spot if you were on a regular bike you would have had to stop and dismount while we were low enough to ride under the barrier.   I ended up with 66 km for the day.

Here's a picture of a new seat in development. 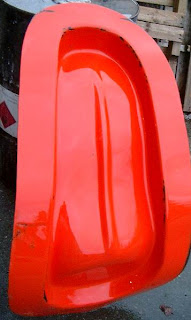 I﻿ have had this seat around for a couple of years and been slowly making changes until I was happy with how it fit me.  The original idea was to build my own highracer with an integrated seat and tailbox, but realising that I would never have time to do it, I ending up buying one instead.  The seat differs from other composite seats that have two large ridges down the back for stiffness and are pretty flat crosswise on the front.  I found that these seats never seemed to fit me well  as I seem to need a groove in the middle of the front for my back.  In the picture you can see the groove down the middle and a small stiffening flange all around the outside of the seat.  The  mould has wide flanges on it so we can either infuse it or use our proprietary bagging process.  ﻿It may well be quite a while until I get to try the seat out.  If it fits in the Borealis it could reduce the weight by a good part of a kilo and lower the COG a bit for better cornering.  In Version  2 if I end up a bit lower the Flevobike roof will work better with my helment on.  Right now I fit without touching but if I turn my head I just contact the roof with my helment.
Posted by velomobiles.ca at 10:25 PM No comments: 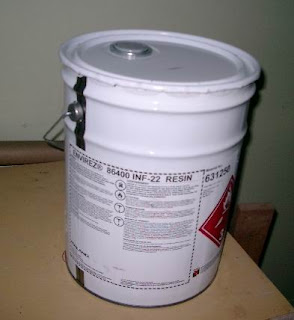 A somewhat greener resin we are about to try out.  It is partially made from plant-based materials.  From the literature we would never use enough to make a big difference but every bit counts.  Its available in a standard formulation and also one for infusion.  We most likely wouldn't be using it for our kayaks as it is not recommended for use under the waterline without a barrier coat.  The numbers from the spec sheets are quite good especially when compared to less expensive polyester resins.
Posted by velomobiles.ca at 8:00 PM No comments:

I have started on the plug for the new, wider Borealis that will fit on the Sprint trike. Right now the Borealis only fits the Sprint NT(narrow track) or the older QNT trikes from ICE in Britain.   After using the Borealis Version 2 a bit I have decided to incorporate most of the changes in the top to the new Borealis.  The end result will look somwhat different from the present Borealis with a slightly shorter nose and longer tail.  There may be some other changes too once I see it evolve a bit. 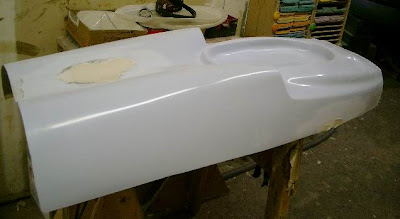 Here is a picture of the new door plug.  I built it so it could be used to make a jig for trimming the door for Version 2 and then as part of the wider Borealis plug.  I am fitting the first door for the first production Borealis Version 2 and need a jig to make trimming the next one more efficient.  I am carefully fitting the door so it's taking a few hours but once its done correctly I can use the door to mark the jig.  Once I have the jig setup right, trimming any future doors will be much quicker.
Posted by velomobiles.ca at 11:50 PM No comments:

Here are a couple of  pictures of the Flevobike roof installed on the Borealis. 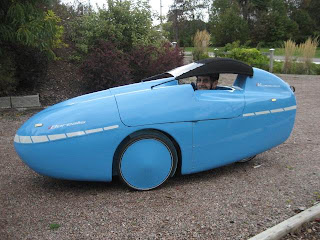 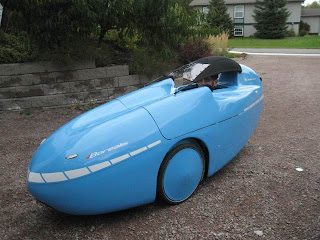 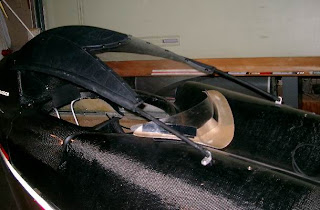 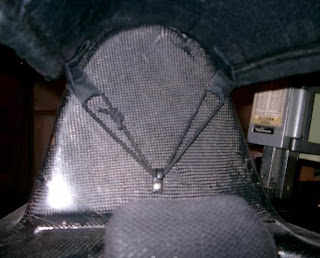 I don't use the velcro to hold the back end of the roof down, instead there is a lenght of shock cord and a hook to latch it around.  I found that the velcro while it worked wasn't quite as good as the shock cord.   In front of the roof you can see the wind deflector in place.  Tthe lexan part can be removed and replaced with one that  is taller if needed. I can just reach foward and detach the whole deflector if I am getting too hot or it starts raining.  If I have a serious downhill coming up I will put in place to keep the wind out of my eyes.  I find it is sometime difficult to see well at over 60kph even with my glasses on.  A prescription set of biking glass would be ideal but this also works.
Posted by velomobiles.ca at 9:24 PM No comments:

Welcome to our new blog about velomobiles

One of the first pictures of the Borealis Version Two.

The biggest change is to the top which is now about 5 cm lower than before.  While I still just fit, this will be much better for medium and smaller riders.


I built new parts to replace the original top on mine.  The top is also a bit of an experiment as I used some Innegra and carbon fiber in the nose and the door to see if the parts could be lighter than using just Kevlar and carbon.  The nose is just 16 grams lighter using 4 oz Innegra instead of 5 oz Kevlar and it is not quite as stiff. The door actually came out considerably heavier than my original door and has some problems with distortion.  Not entirely sure what caused this but the low density of the Innegra and how it was oriented may be some of the explanation.  I am not surprised that the door is heavier as it has almost twice the thickness of Innegra in it than the thickness of Kevlar in the original door.
﻿
Here you can see the difference between the tthe two versions.  ﻿